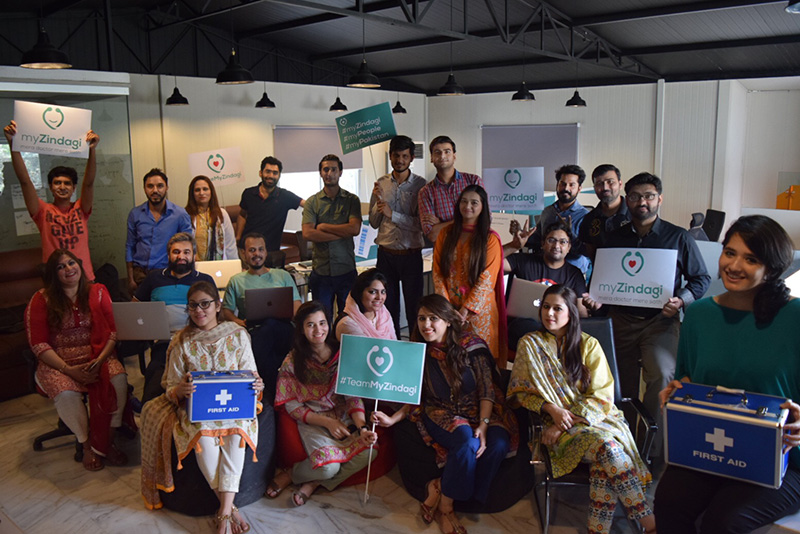 Building an Office For myZindagi

Two months ago myZindagi.pk found itself in a very unique situation. We were growing rapidly and had hired new engineers and a sales team. We were busting at the seams. At first it was fun sitting close to your co-workers but after a while it became cumbersome running into each other’s desks and bumping others with your chair. Some team members are more delicate then others and we realized we needed a new space to house our team.

Renting a bigger office was going to take too much time and effort. The added expense of renting a large commercial space in the city was also going to hurt our bootstrapped budget. On top of that a summer in Lahore may be the worst time to move anything across the city. However, staying in our current space was going to hinder growth. We needed more people on board but just didn’t have any place to seat them.

We were stuck in between the proverbial rock and a hard place. That’s when inspiration struck and we set off on a two week whirlwind adventure to accomplish the impossible.

The idea to build our own office on top of our current office space came to our COO, Haseeb Sattar, during a brain storming session. As we sat huddled in that painfully small board room, Haseeb suddenly said, “Why don’t we just build the office ourselves?”

At first everyone laughed but then it slowly sunk in that this wasn’t that absurd of a proposition. Out of the box thinking was something we had touted in our every day running of operations. Why could we not use the same innovative thinking to get our very own custom built office? It is surprising how principles that help make startups successful are very similar to the steps needed to smash other goals.

myZindagi.pk CEO, was inspired by American and British startups that were tackling patient problems in healthcare. However, we did not take for granted that just because something is successful in the West that it would do well in Pakistan. So before we dove in and committed to the project, we validated our idea. Our team set out into the city and spoke with doctors, hospitals and patients. The idea was to identify if there was actually a need. We kept notes, built a database and recorded all interactions.

What encouraged us further was that there were other early stage startups working on the same problem. In most cases, young entrepreneurs get discouraged when they see strong competitors working on similar ideas as them. They believed that the ‘first mover advantage’ is too much of a barrier to overcome. In reality, if you see competitors trying to tackle similar issues or creating solutions like yours, then that means you may be on the right track. There is a need and there is money to be made.

With our office we followed a similar process. We consulted with construction firms, shared our thoughts with others and basically tried to figure out if the idea was even feasible. Basically we hoped to utilize the second floor of our current location which had a very large roof top. This open space had no purpose other than to house the massive generator being used by our office. If we moved that large piece of equipment we were left with a L-shaped space that measured about 4000 square feet. This was enough space to accommodate our team and it also left us with ample room to grow.

With the myZindagi service our team moved very quickly from the validation to planning stage. Our CTO and product team put their heads together and worked out a 1 year plan. We factored every aspect of the business from development to marketing. We tried to be as comprehensive as possible. The idea was to basically plan for the worst and hope for the best. We spent a good amount of time on this. However, we didn’t go overboard. Analysis- Paralysis is a real thing and we refused to be beaten by it. Once we had covered all our bases and had a plan in place, we went ahead with the execution phase.

Planning was also a crucial part of our office project. Since none of us had any experience with construction, we had to verify everything with experts and contractors. Our plan was to not go the standard route of brick and mortar. We narrowed our choices to pre-fabricated walls and a roof. Since we did not plan on putting anything on top of our construction, a pre-fabricated roof was going to work just fine. We did not need to pour any concrete or use any steel beams. Speed was also a major factor in using pre-fabricated walls and a roof.

As in the development of our service, we looked at all factors when building the new office space. One aspect we dug deep into was LDA (Lahore Development Authority) approvals and building permits. We did not want to spend time and money on execution and then get blind-sided by some ordinance that we did not know about. We also worked in the approval time that would be needed from the government department.

As with any with any higher risk venture, planning needs to take place before action. We had to put together a general idea of what we needed from our workspace and then dive into further detail.

Our plan for myZindagi was to first develop a MVP (Minimum Viable Product). So we stripped away all the bells and whistles and really concentrated on the core of the solution. , when we had a working MVP, we realized that the market was not ready for the solution as we had developed.

The problem was that our solution depended on doctors and patients utilizing on online scheduler. This would allow our appointment booking system to be synched with real time data and show patients accurate open slots. Our testing with the MVP showed that even though patients were happy to use the online system, doctors were not as accommodating. They preferred their current paper based systems because it was too much of a hassle for them to switch. A certain percentage of doctors were quite happy to see something new and wanted to use it right away. However, a majority of established doctors just were not ready.

This is when we rolled with the punches and decided that we needed to stop forcing our solution and rather listen to the customer. Doctors did want a solution but they just were not quite ready to change everything about their operations. We had to utilize their current setup and slowly move them onto our platform. That’s why we added a human touch to the service. Patients and doctors can both call, email, SMS or WhatsApp us appointment requests or questions. We coordinate accordingly and book appointments, answer questions and make deliveries. Our customers, both patients and doctors, don’t even have to login to our site to avail the service. Once we made this change our adoption rate sky rocketed. We met the user at their level and smashed it out of the park.

So the learning we gathered from that experience was that as entrepreneurs we should keep moving forward, put out fires along the way and adapt quickly. When building our office our mindset was very similar to this. Once our plans had been finalized and a feasibility report was in place we just had to work accordingly.

From the get go the work took place at break neck speed. Instead of building out everything right away, our team first built the exterior of the building. The shell was a large open space in which we roughly had an idea of where we wanted to place our teams which would be divided up by team functionalities. The next step was the electricity and networking. This was straightforward and we placed electricity outlets evenly across all areas so that four staff members could share a point.

We added furniture at the end of the build process. This was actually the most difficult part of the process. In order to keep costs in check we decided to reuse our old furniture which was custom built for the old office. Breaking this apart and then resetting this in the new office required teamwork, imagination and tons of patience. It was honestly like working on a giant jigsaw puzzle with 10 different people moving things around at the same time.

I think it’s a miracle that we got everything in place without breaking anything. It ended up working out because everyone was focused and knew that we had to get this done. We chose to work on weekends instead of week days so we could build the business and not have any interruptions.

One of the core philosophes of myZindagi has been that room for growth should be baked into the product. The product that is currently live is at least 6 months behind what we have on paper. We choose to work this way because we have a solid plan for moving forward but avoid painting ourselves into a corner by being flexible enough to scrap any plans that contradict the result from the market. There are a lot of great features still waiting to be launched by myZindagi but they will only be part of the service if our customers actually use them and benefit from them.

When building our office we wanted to make sure that there was enough room to grow and also make any changes if needed. One interesting problem we faced was that our in-house doctors were cut off from the rest of the team. Initially our doctors were seated in a custom built room that maintained their privacy when they spoke with patients. What we didn’t realize was that they would need to coordinate very closely with our customer service team.

When you first call into our video consultation service, you are connected to a customer care representative. This intervention is done to offer guidance and hand holding for people that are new to the service. The CSR also helps in the ordering of prescriptions, setting up appointments with specialists and scheduling lab tests. This frees up our doctors to consult with other patients. Initially the CSRs were seated at one end of our office and the doctors were in a closed off room. Our CSRs ended up running back and forth when they wanted to ask a question or get details on replacements for medications. Although it was great exercise for our team, we wanted to make life easier for them. Since we had the ability we quickly moved the customer care team next to the doctor’s room and added an internal landline for quick calls.

I think we crossed the finish line because we hustled like a true startup. The ability to quickly adapt and launch new services makes startups very dangerous for established players in any vertical. The now cliché “disruption” that many entrepreneurs strive for stems from this speed and agility that has become the envy of large corporations. So keep pushing forward, keep innovating and keep believing in yourself. That’s how we launched our product, create our office spaces and that’s how you can use the same mindset to achieve your startup goals.